If you are like me, you watched the Golden Globes this past Sunday Night. I like this awards show much better than the Oscars because it is fancy, yet all the stars seem to be relaxed and are enjoying themselves…because they are smashed.

I am not one to be all “Girl Power,” nor am I trying to follow in the footsteps of Gloria Steinem, but can I get a “What What for the Ladeeeeeeeeeezzzz??!!”

Sorry boys, but the chicas took it this year at the Golden Globes.

Let us start with lovely and talented hosts: Tina Fey and Amy Poehler. They win, again. I personally love these two. They are hilarious and both are comedy geniuses (a two-fer!). Apparently, all of Hollywood seems to think so too. I don’t think Bono just makes out with anyone.

Moving on – Jennifer Lawrence. Love her, love her, love her. A brilliant actress, everyone sings her praises as an awesome person, and she is only twelve and half years old. Amazing! Some fashion critics poo-pooed her white dress last night. Whatever. Let’s face it, this chick could wear a trash back covered in soggy Raisin Bran while flipping everyone off and I would still love her. 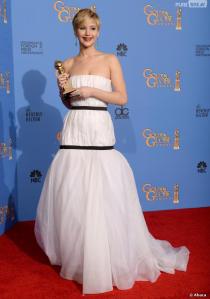 Amy Adams. Also a winner last night, from the same movie, American Hustle. Another amaze-balls actress. She can sing, dance, act, and not look ridiculous in princess clothes. She also seems sweet.

Diane Keaton. She accepted the Cecil B. DeMille award for Woody Allen. She wore a lady tux and pulled it off. She looked great. Don’t know about you, but if I tried to wear a tux I would look like a very disgruntled cross-dresser.

Julia Louis-Dreyfus. Hilarious. She did not say one word last night and stole the show. She is a brilliant comedienne who does not take herself too seriously, but is seriously talented.

Amy Poehler won for best actress in a TV Comedy. Double score. Hate to say it, I am just happy that chick from Girls did not win again. We are on overload with her.

Rita Wilson. I know she wasn’t nominated for anything. I just really like her.

Emma Thompson. While watching her barefoot onstage made me a little uncomfortable (Put on your shoes Emma! There could be nails on the stage! Are you up to date on your tetanus shot?), I like that she just does not give a damn. Also, she is a kick ass actress.

Drew Barrymore. Rocking the pregnant frock. She wasn’t the only one beautiful and prego. Olivia Wilde, Kerry Washington, and Elsa Pataky stood by her in soon-to-be motherhood. That’s a lot of hottie hormone action. Also, I want to be Drew’s friend. 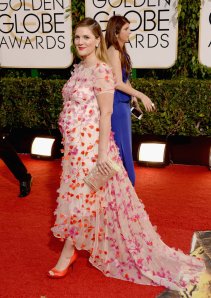 Andy Samberg. Not a girl, I know. But he came out of the SNL family and he kept the night lighthearted while being shocked and genuinely thankful for his win.

What did we learn from the night? Having a personality wins. The men seemed so serious about their wins. Why? Society doesn’t want to hear about how you have “grown as an artist,” and that every day you “dive deeper into your craft.” Nope. We just want to see it and experience it. Remember that old saying, Show, don’t tell. Boys, the ladies have you beat on this one.

Please note, I love men. Many of my favorite actors and comedians are male. But watching last night made me so proud to be a woman, I almost ran out and bought two packs of tampons. During the day.

So ladies, wave your bra high and proud. If life gets you down at the PTA, or if that loud talker guy at work got your promotion, just do what Tina or Amy would do – make them laugh.

Oh, and then spread a rumor that he has a raging case of herpes and put super glue all over his desk.

My Tweets
Join 836 other followers