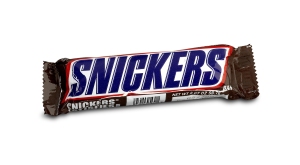 The season of Lent is here. Hooray?

I am Catholic. I was raised Catholic, attended twelve years of Catholic education, and am now completing the circle of life by sending my daughter to a parochial school so she too will know the wonder of plaid polyester. And only owning two pairs of “layman’s” pants.

As Catholics, we repent during Lent and wait for the joy and celebration of Easter. This means, we give up something we really like, then bitch about it for forty days.

Taking stock on all the goings on around me during this time, I have come to a conclusion: I suck at Lent.

I think it has something to do with being a veteran Catholic; I was born into this religion. There are many New Catholic (NC) converts at our church, and they are really making us craggy Catholics look bad.

2)      Stations of the Cross. A series of prayers said in reverence to the Passion of the Christ. There are fourteen stations.

In grade school we had to attend the Stations during Religion class. They were long, extremely sad, and always right before lunch.

What the priest looks like after I’m done talking.

4)      Suffering. We reflect on Jesus’ suffering and dying for us, because of his love for us.

5)      Meatless Fridays and Fasting. During Lent, Catholics abstain from meat on Fridays and Ash Wednesday. Fasting and abstaining are encouraged throughout Lent.

So does new equal better in this situation? Not necessarily. I think we need each other.

I love my religion, but clearly I could use a little pep in my step from the NCs. They can re-teach me all the stuff I forgot about while taking a nap during Freshman year Theology. We oldies can confirm that nuns are not a myth like the Yeti; they are real and we were taught by them.

So this season, I am willing to keep an open mind, like the New Catholics. Maybe I can remove the shame, help out more, and be more communal.

Right after I flog myself for eating this Kit Kat bar.

I am a woman. I am very happy being a woman. In fact, I have never wanted to be anything but a woman.

So I guess you could say things have worked out for me.

Or so I thought.

This past week was my daughter’s Spring Break. Like many parents, my mission was to entertain my child. This included a trip to the Dallas Zoo.

We had a fantastic time. We fed giraffes, pawed at fish and ponies, and drank out of gigantic cups shaped like rhinoceroses. Perfect.

However, I did notice something.

In the Wild Kingdom, the female species really gets the shaft.

Okay, it’s not monkey, it is called a mandrill, but same family. Notice the colorful markings on the face and behind. Pretty cool. A male.

Now look at the female.

She probably has not slept in days.

Pathetic. Not nearly as colorful.

Onto the lions. The males have these gorgeous manes, a la Fabio. 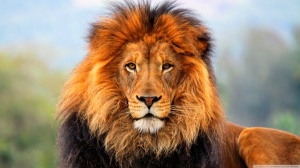 Now look at the female. 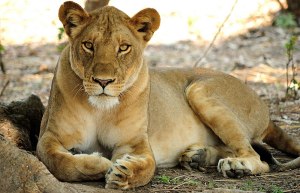 At least she is saving money on hair care products.

Still beautiful, but a lot less hair. Fun Fact: these broads do all the work. They take care of the young, they hunt the food, and they are always the last to eat. This same scenario also goes down at my house. Hmmmmm….

Let us move onto the deer. Male stag – gigantic antlers.

However, not nearly enough on her head to protect herself. It’s as if one of the Dallas Cowboy Cheerleaders ran onto the field to catch a pass without a helmet. Not good.

Let’s take a peek at the female Cardinal.

When I look at this bird, the loser’s song from the Price Is Right comes to mind: wa wa wa waaaaaaaa. Ridiculous.

We had a great day at the zoo, but it left me asking, “What gives man…er…woman?”

I am not a man-hater, not at all. Many of my close friends are males, I am married to a man, I even have a pair of boy-cut jeans. But viewing these wild life gender differences, it made me draw some parallels to the un-evenly tipped scales in our human society.

Currently there are a few “hot button” women’s issues: equal pay for women; lack of maternity leave in the United States (I went back to work at five and a half weeks after I had my daughter. My boobs leaked, my head constantly throbbed, and my uterus slapped me across the face once every hour to keep me awake.); the trafficking of young girls; female mutilation; and the underrepresentation of females in the financial, bio-tech, and movie making industries. Just to name a few.

I feel as though we have been talking about these same issues for, well, decades. It’s like the repeated conversation I have with my husband about his night to cook dinner. I have to remind him, then he gets upset I’m reminding him, then I sound like a nag, then he thinks I sound like a nag. The result is two people who are angry and hungry.

Why can’t we have this conversation one time, fix it, and move on? Preferably with tacos. Why on earth are we still talking about gender equality? I bet society is tired of hearing about it, because we sure are tired of talking about it.

In my own life, I have been called, “little girl,” and “honey,” during work meetings. I have been omitted from pertinent workplace conversations when I was the only female in that department. I have been pitied and talked down to for being a stay at home mother.

While the above actions are hurtful, wrong, and just plain ridiculous, I still feel pretty good about myself, and about being a lady. Because I know that every job I am hired to do, I am more than qualified. I know that I am able to produce at 110%, even with a lack of information. I know making the decision to stay home with my child, was just that, my decision. And I’m a damn good mother. I am not angry at the menfolk, but I am curious why these things happen.

Circling back to nature, I wonder if the doe is giving that stag an earful about deer equality. Is the female Cardinal running for CEO at the bird seed and worm distribution center? Will the lioness ever look at Leo and say, “You know what? You can get up off your dirt mound and take that zebra carcass out the curb yourself!”?

Probably not. Humans are the only species that can use words to get a point across. While we cannot magically change situations and how people think, at least we can make others aware. We are lucky enough in this country, that we can get up every day and choose who we want to be. And I guess that is something to be thankful about.

Unless you are the female mandrill. Then life seems a little sucky. 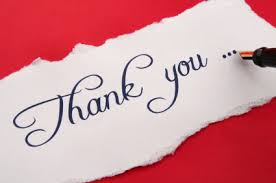 People say I am a friendly. I smile a lot, I like to chat with others, and I’m out-going. I guess you can say I am a pretty happy person (try not to throw up in your mouth too much).

But take a step into my head and you might want to grab a flashlight, a bottle of Prozac, and some turkey-jerky.

While presenting at the 2014 Oscars for Best Adapted Screenplay and Best Original Screenplay, Robert De Niro said, “The mind of a writer can be a truly terrifying thing: isolated, neurotic, caffeine-addled, crippled by procrastination and consumed by feelings of panic, self-loathing and soul-crushing inadequacy. And that is on a good day.”

Bobby, you couldn’t be more spot on.

The inside of a writer’s mind is always a wild ride. It is dark, creepy, and sometimes full of Snickers bars. The inside of my noggin looks like the love child of Edgar Allan Poe and Ruth Buzzi, but with a lot of grammatical errors.

You might get lost a few times down a rabbit hole ripe with memories of roller skating into a rose bush, getting caught for smoking cigarettes in the closet, or school kids laughing at an unfortunate bob haircut. These memories are usually followed with feelings of worry, fear, anger, and laughter. Then wine.

Not that I would know firsthand.

Writing is such an odd creature. It evokes so many different responses. Some people need it like a drug. Others use writing a form of release. It helps some organize their thoughts. Many are graded on how they write. Sometimes writing is boring. Sometimes my ass hurts after writing for too long. Writing can be pure torture for many. Just ask my seven year old.

The art of writing evokes the same emotions as the act of reading. There is crying, there is laughing, and there is, “This is the dumbest crap I have ever wrote/read. No one cares about a donkey’s point of view.”

However, for many writers, there is one subtext of fear: No one will give a shit. 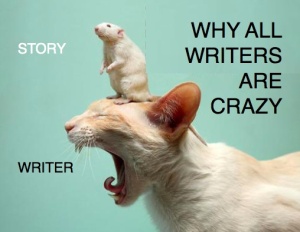 As writers, we give a shit. Too much in fact. Those sentence came from inside our heads, our hearts, and most often, the life experience of letting one rip during Social Studies. Not that I would know.

Writers write because we have a story to tell. If we don’t get it out, we might go crazy and accidentally buy too many bags of tortilla chips and multi-colored pens. Then stare into space for a while. Once again, not that I would know anything about that.

So Dear Mr. De Niro:  I want to thank you for shedding some light onto the thought process of the writer and why we have to write that novel, short story, script, and yes, blog.

If we are lucky, someone else will give a shit enough to read it.

My Tweets
Join 836 other subscribers